They witnessed the highlights of the event, including the presentation of awards such as the “Distinguish Navy Cross,” “Officer of the Year,” Civilian Human Resource of the Year,” “Gawad sa Kaunlaran,” “Enlisted Personnel of the Year,” “NFSL Vessel of the Year,” and “Plaque of Appreciation for the Stakeholders.” CSPC was among the institutions who were given the latter award for its invaluable cooperation and support rendered to NAVFORSOL, which immensely contributed to the accomplishment of the Command’s mission. 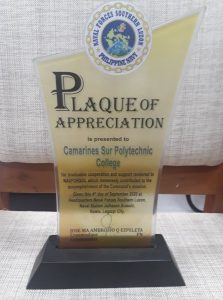